The topic of channel and transmit power is often confusing for Wi-Fi novices and experts alike, as there are several considerations to take into account: different frequency bands, varying channel sizes, and transmission power setting tradeoffs.

In this two-part series, we will cover need-to-know info including the definitions of channel and power, and establish best practices for channel and transmit power planning on both 2.4 GHz and 5 GHz.

Defining Wi-Fi Channels
As you probably know, the Federal Communications Commission (FCC) and similar governmental agencies in other countries regulate the use of radio frequency spectrum. Most spectrum is licensed, meaning that government agencies or commercial entities must purchase or lease a portion of the spectrum to have exclusive use rights to that range. Some frequency bands are unlicensed, meaning that anyone can broadcast in that part of the spectrum without a license, so long as specified maximum transmit power limitations are met. It is in this portion of the wireless spectrum where Wi-Fi operates.

Channel Ranges
Each Wi-Fi access point broadcasts a signal on a particular channel, which encompasses a specific center frequency and channel width. Both 802.11n and 802.11ac use larger channel widths, 40 MHz in 802.11n, and 80 MHz or 160 MHz with 802.11ac. Larger channel sizes enable more data to be sent simultaneously, increasing the link’s throughput. However, since the breadth of the unlicensed bands used by Wi-Fi is fixed, there are fewer independent, non-overlapping channels. These bigger channel ranges are also subject to a higher level of noise within the spectrum and more interference from neighbors, making the use of larger channels a tradeoff between potential throughput and achievable signal quality.

Channel Interference
Wi-Fi signals interfere if their transmissions occur on the same or overlapping channels in the same space. A wireless client device or receiver hears transmissions from multiple sources simultaneously, yet it is incapable of distinguishing between these different sources. The data received is, therefore, a mashup of signals from various sources. A checksum or error-detection of the received data indicates a corrupted transmission, which requires the original transmission source to retransmit the data.

Band Steering
Most enterprise access points also provide a feature called band steering, which encourages dual-band capable client devices to connect to the 5 GHz band to obtain higher speeds. The 5 GHz frequency offers larger channel sizes and fewer sources of external interference than the 2.4 GHz band. While band steering is not part of the 802.11 standard, it is beneficial. This is particularly the case with the emergence of new IoT network appliances that operate on 2.4 GHz and use new, low-power 802.11b chipsets. With more devices crowding the 2.4 GHz band, it is best for all clients that can operate on the 5 GHz band, be directed to do so. 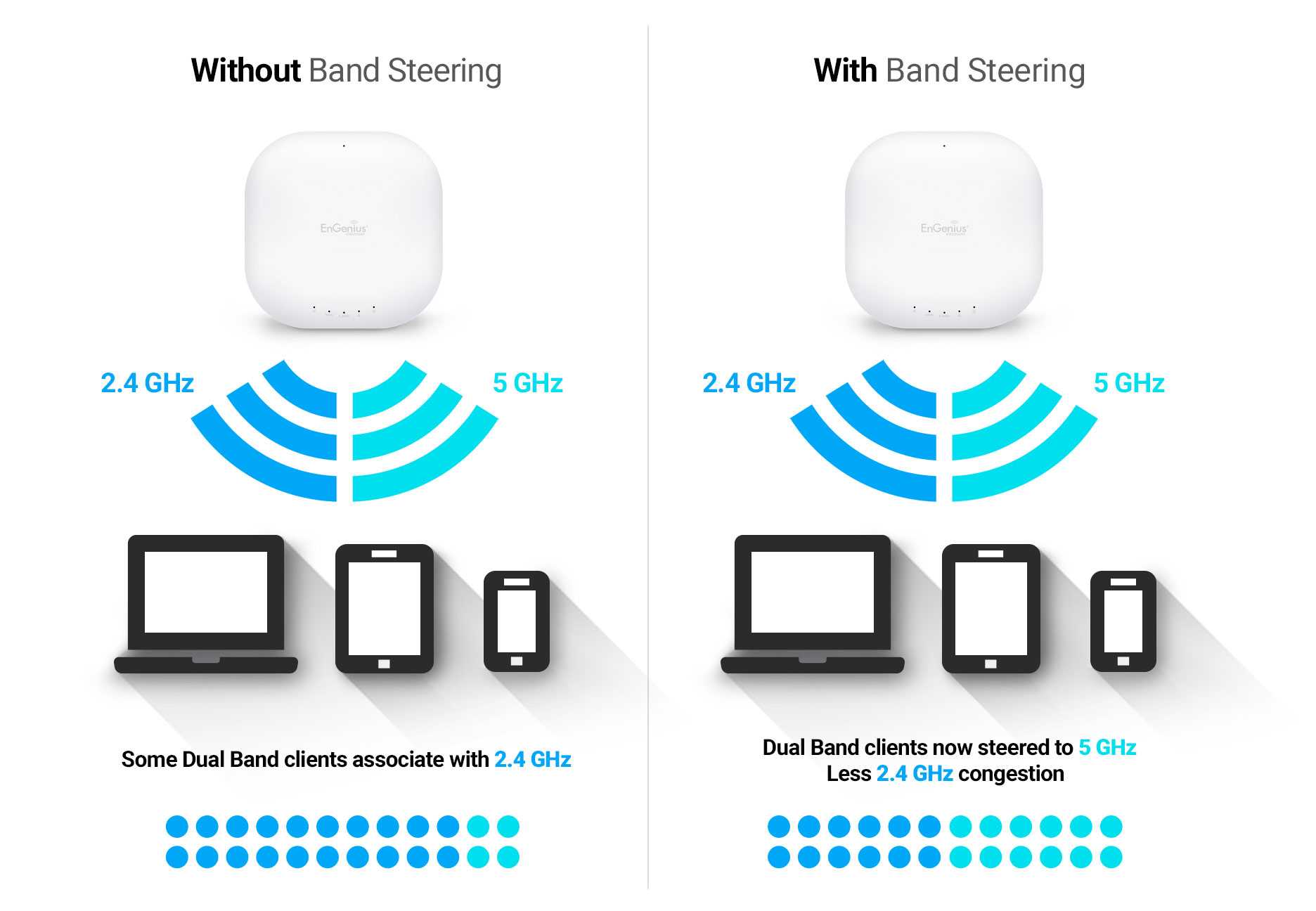 Defining Transmit Power
The transmit power of an access point radio is proportional to its effective range. The higher the transmit power, the farther a signal can travel, and the more obstructions it can effectively penetrate. A stronger signal at a given distance generally results in a higher signal to noise ratio, which typically allows for more complex modulation and coding schemes (MCS) and faster data speeds.

Strong v. Weak
In early Wi-Fi deployments, which were primarily driven by coverage requirements, it was common use to turn up the power on the AP transmitter as high as allowed by FCC and IEEE regulations. This approach worked when most clients, such as laptops, had reasonably strong transmitters themselves. But, with the emergence of smartphones, tablets, and network appliances, there is often a transmit power mismatch that then leads to a range mismatch.

Furthermore, in high-density deployments like college lecture halls, conference centers, or stadiums where hundreds or even thousands of devices are operating within the coverage area of a single AP, more access points are needed simply from a capacity standpoint. This necessitates using lower transmit power levels, directional antennas, and very careful channel planning to prevent co-channel interference. Another option in high-density locations is to deploy tri-band-capable access points. Tri-band APs double the wireless capacity of the 5 GHz band and would require fewer devices to accomplish this.

Dual-Band Best Practice
As compared to 5 GHz, the 2.4 GHz spectrum has less free space path loss and attenuation through standard building materials, giving it a larger effective range at a given transmit power level. However, when using a dual-band access point, it is effective to equalize the coverage area for both bands.

Editor’s Note:  This updated post was originally published in 2015.