Smaller companies might only need client VPN while larger companies are more likely to need site-to-site. The idea is to replicate for users the experience of being in the office with seamless, secure access to all of the resources there.

What are virtual private networks (VPNs)?

VPNs establish an encrypted tunnel over the internet between two endpoints. Ideally, data sent through the tunnel cannot be intercepted in transit. The data is encrypted upon sending and decrypted upon delivery. The biggest difference between client and site-to-site VPN is the type of endpoint being connected.


How does client VPN work?

With client VPN, travelers, at-home workers, and mobile users can use an internet connection to tap into company resources that are on the network using their own devices like laptops and mobile phones. This is especially helpful if you’re using public Wi-Fi from a coffee shop, your home, a hotel room, or other remote location where you aren’t sure if someone is snooping.


How does site-to-site VPN work?

Site-to-site VPN connects entire networks to each other. They send and receive normal TCP/IP traffic through a VPN gateway, which again can be pre-installed with VPN software. Often, site-to-site VPN can connect global branch offices to corporate headquarters. 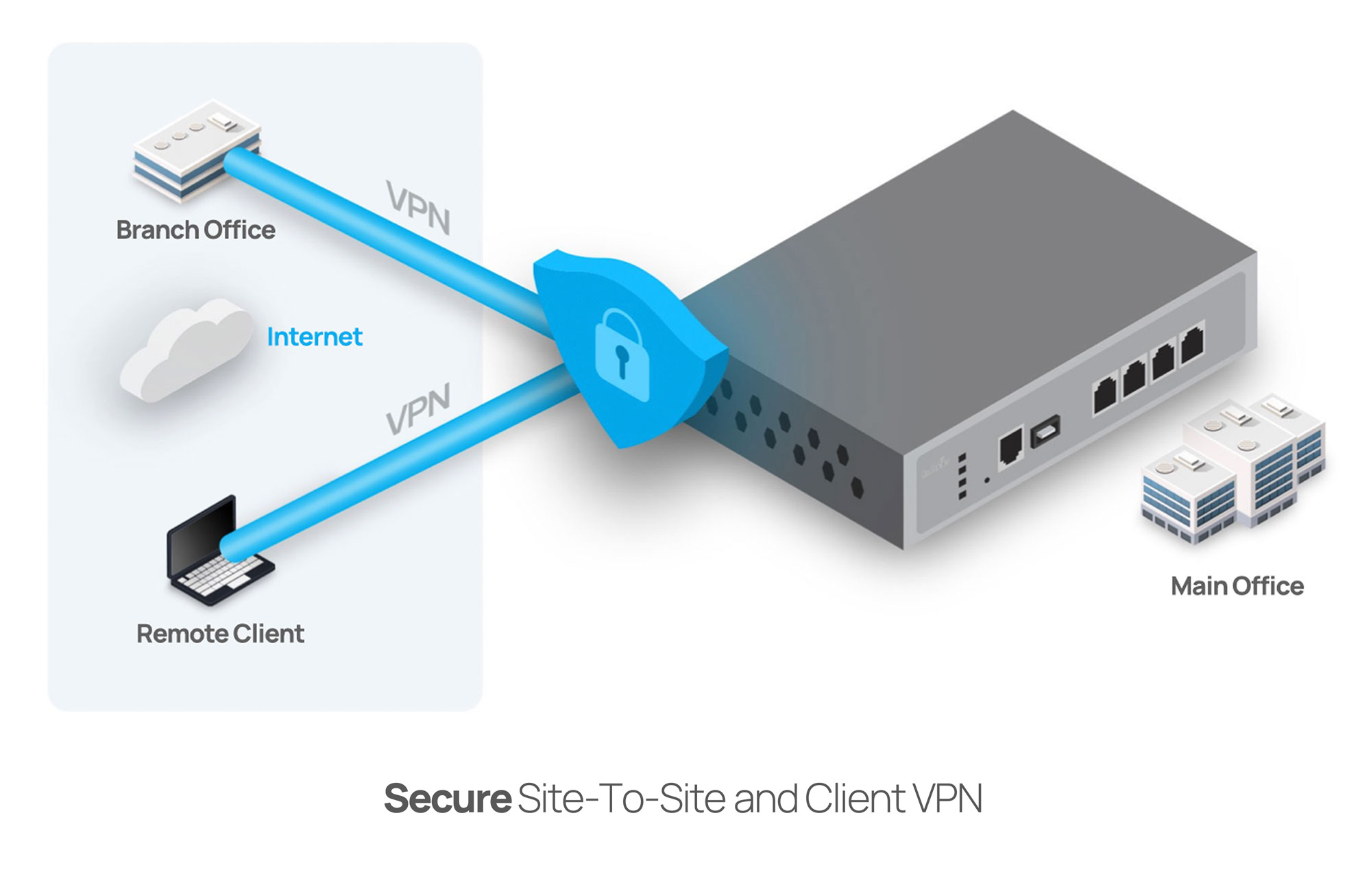 Generally speaking, companies with only remote workers can function quite well—and affordably—using client VPN. However, site-to-site VPN works better for distributed networks at multiple locations for enterprise-level companies with more money to spend.


How complicated is VPN setup?

However, EnGenius has recently released a new security gateway, which features site-to-site and client VPN that can be activated in a few clicks, allowing businesses to create secure, private connections instantly.


How secure is a VPN?

It’s a fact that no security tool is one hundred percent foolproof. With VPNs, many companies worry about how secure their sensitive data is even via an ostensibly secure tunnel that delivers encrypted transmissions over the internet. However, new VPN protocols have made the technology much stronger in recent decades.

The EnGenius gateway uses the IPsec protocol, which uses encryption keys as well as multiple packet headers and trailers to encrypt and authenticate the data. IPsec also uses more secure UDP (user datagram protocol) instead of TCP to get data through firewalls. In the latter case, TCP sets up dedicated connections that can make your network slightly less secure. UDP is better.


How reliable is the connection?

EnGenius Cloud has important features that ensure continuous connection even when things go wrong. For example, if a construction crew accidentally severs the fiber cable connecting a business to its ISP service, the gateway can maintain failover connection one of two ways: (1) through the second WAN port connected to a separate ISP, which can be considerably expensive, or (2) through a 4G/5G dongle plug-in that will maintain the connection wirelessly.


Are you ready for client and site-to-site VPN functionality?

If you are interested in learning more about our EnGenius Security Gateway, please contact us to see if our gateway can meet your VPN needs. Our end-to-end network solution unifies the management of gateways, access points, and switches through a single vendor.

Give us a try.