Read Part 1 of this series

Wi-Fi Channels on the 2.4 GHz band
On the 2.4 GHz band (802.11b/g/n) in North America, there are 11 channels of 20 MHz size allowed by the FCC. Some or all of channels 12-14 are allowed in some other countries, such as Japan. Unfortunately, the center frequencies of channels 1-13 are only 5 MHz apart, leading to only three non-overlapping channels, as shown in Figure 1.

The 802.11n spec allows for the optional use of 40 MHz channels on the 2.4 GHz band, by bonding two adjacent channels together. However, given that the entire usable band in 2.4 GHz is only 72 MHz wide, there are no two 40 MHz channel sizes that are independent, as shown in Figure 2. This limitation makes the use of 40 MHz channels completely impractical in multi-AP deployments, though it is still unfortunately fairly common to see in practice as most vendors allow this channel width in their default settings.

Given the restrictions on the number of independent channels and how that decreases as the channel width increases, poor channelization will create AP-to-AP interference and thus degrade both usage and coverage requirements. On the 2.4 GHz band, only 20 MHz channel sizes should be used, and channels should be deployed across APs with an alternating static 1, 6, 11 scheme, both horizontally and vertically. 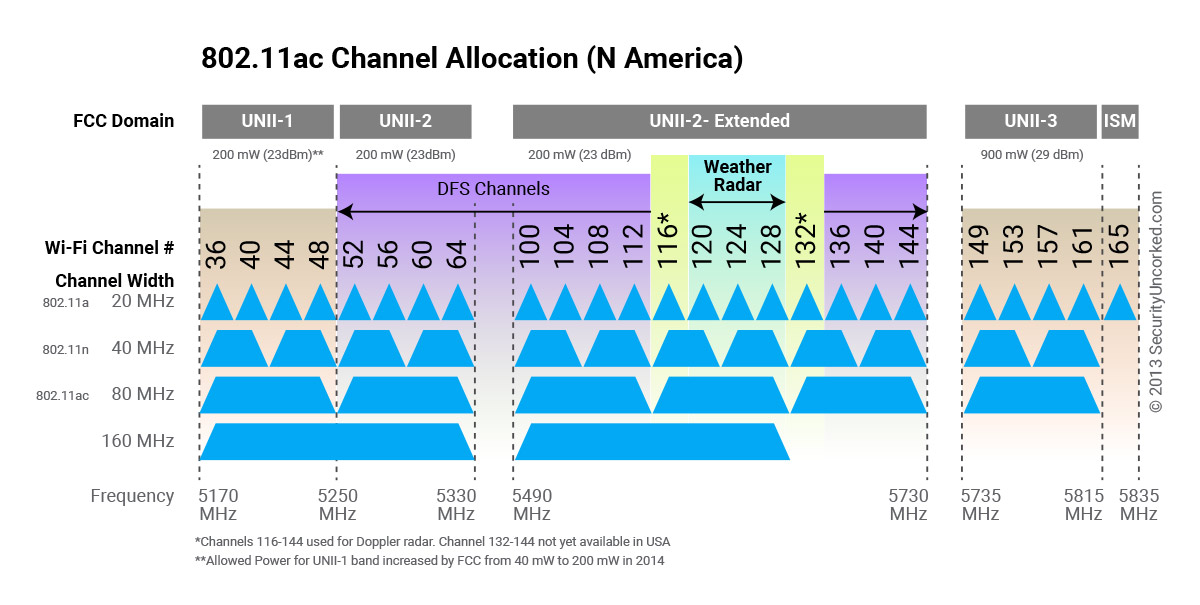 The use of 40 MHz channels at 5 GHz with 802.11n is fairly standard practice. In most SMB deployments, we can use 80 MHz channels with 802.11ac, to double the wireless throughput. In instances where a design calls for high client density settings like in convention meeting spaces or large classrooms, or if there is a specific reason to avoid the DFS channels, we can use 80 MHz channels with 802.11ac, and double the wireless throughput. This is the primary advantage of deploying 802.11ac access points vs. 802.11n access points.

The full list of 20 MHz channels available in North America is shown in Table 1. Governmental regulatory agencies in other countries may restrict the use of one or more of these frequency bands and the maximum transmit power at those frequencies. Most access points require that a country be selected in the configuration, which dictates what channels and maximum transmit powers are available.

Creating 40 MHz, and larger channels involve bonding multiple neighboring channels together. Each bonded channel has a primary 20 MHz channel that is used when an 802.11n or 802.11ac access point communicates with a legacy 802.11a client or an 802.11n or 802.11ac client that is artificially limited to smaller channels. The other bonded channels are “extension” channels and can be either immediately above (upper) or below (lower) the primary channel.

Unfortunately, there are multiple “standards”—ways of indicating bonded 5 GHz channels— which makes referencing those channels very confusing for Wi-Fi novices and experts alike. The three basic methods are to refer to their bonded channel range, their primary channel with extension for which there are two variants for 40 MHz and four variants for 80 MHz, or their center channels, or frequencies. These are shown for 40 MHz channels in Table 2 and 80 MHz channels in Table 3.

Note the asterisk (*) for channel 144. This channel was opened up in March 2014 for use by Wi-Fi in the United States as part of the 802.11ac specification. You will therefore generally not see it as a valid channel option on older 802.11n access points. Furthermore, even on 802.11ac access points, many AP vendors still have firmware that complies with the older FCC specifications- pre-March 2014 and do not recognize Channel 144 as valid for use in the United States. Accordingly, Channel 144 (20 MHz), Channel 140 (40 MHz), and Channel 132 (80 MHz) often cannot be used in static channel plans.

Another complication—the UNII-2 and UNII-2e bands (which cover 2/3 of the frequency space) are still in use by legacy military and commercial weather radar systems. This leads to a requirement known as dynamic frequency selection (DFS), which requires Wi-Fi devices to periodically measure for the presence of such legacy radar systems and move off of the channel for a period if one is detected. Currently, both access points and client devices are responsible for detecting DFS interference from radar devices and, if detected, move off the channel.

Before March 2014, only access points were required to make that detection and channel move, notifying their connected clients to the channel change to encourage them to follow. This was part of the original 802.11h amendment when UNII-2 and UNII-2e were opened up for Wi-Fi. The older rules made more sense from a Wi-Fi operations perspective, as client devices associate with an access point and thus follow the access point’s channel. Unfortunately, many legacy client devices did not know how to interpret the “I am about to change from channel x to channel y” message from the AP and therefore didn’t move off the channel fast enough, which is likely what prompted the rule change.

The unintended consequence of this is that many consumer Wi-Fi device manufacturers decided it was not worth investing in the code to do the DFS detection, and as a result will not operate at all on any of the UNII-2 (52-64) or UNII-2e (100-144) channels. This is why many 802.11n consumer devices supported the UNII-2 and UNII-2e channels, but their newer 802.11ac counterparts do not. Ironically, this also tends to be a limitation of the consumer wireless router products from manufacturers that also make enterprise access point equipment that supports DFS detection.

Fortunately, most phone and tablet manufacturers are not so shortsighted, so iPhones/iPads and most mainstream brands for Android phones/tablets with 802.11ac capability will work on the UNII-2 and UNII-2e bands. Also, fortunately, most consumer client devices are dual-band, so if they do roam to an AP with a 5 GHz channel they do not recognize, they will still connect on the 2.4 GHz radio and be treated as a 2.4 GHz-only client. However, 5 GHz-only consumer devices, such as USB dongles and 802.11ac wireless bridges, may have difficulty connecting in such scenarios.

Editor’s Note:  This updated post was originally published in 2015.